This is Something That Made Me Crazy for a Long Time 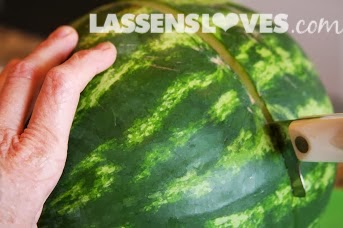 While my family loved watermelon, I hated to get it.  Why?  I dreading cutting the darned thing.  The knife had slipped too many times and I was knife-shy!  How do you cut up a round thing without putting your fingers in mortal danger?  Every time I cut into a watermelon the thing would roll around and I would get nervous.

Someone Finally Showed Me How!

I was helping at a party, and someone had just the tips I needed!  So now, I share with you!

The First Cut is the Worst

You do have to make one dangerous cut–the first one.  But hold it firmly on the cutting board with one hand while you cut the melon in half. 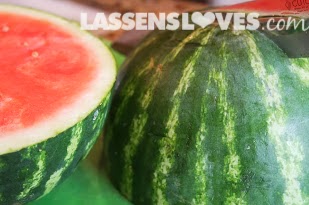 Flip it over on the cut side and then cut it in half again. 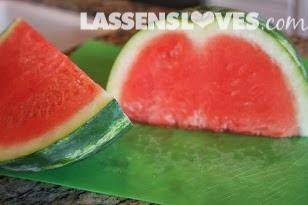 Then you start cutting the rind off.  This is actually easier with a thinner knife, not a big butcher-style. 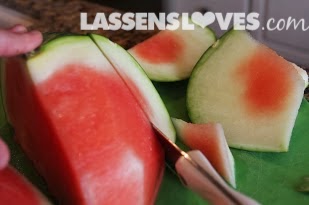 You’ll end with a quarter circle of rind-free melon, which you then just slice into the size of chunks that you want! 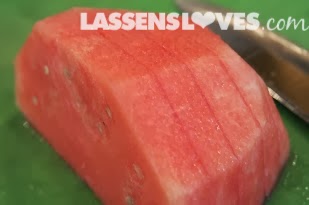 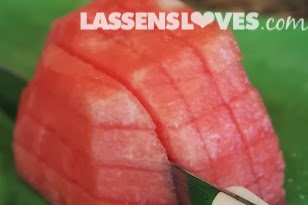 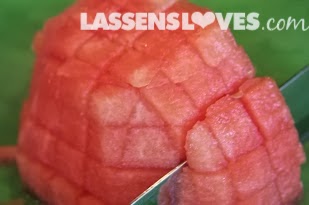 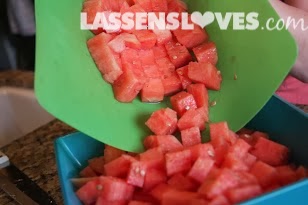 Done!  Right after I cut this melon I put it in front of a bunch of teenagers with forks and they were in heaven! 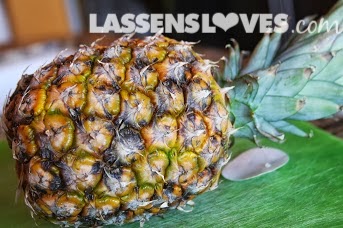 We all love pineapple at my house.  I usually have one ripening in the fruit bowl, and when it smells just right, I cut pineapple in a similar fashion to the watermelon. 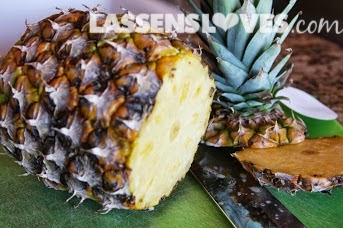 First, cut off the top and the bottom.  Looks and smells delicious! 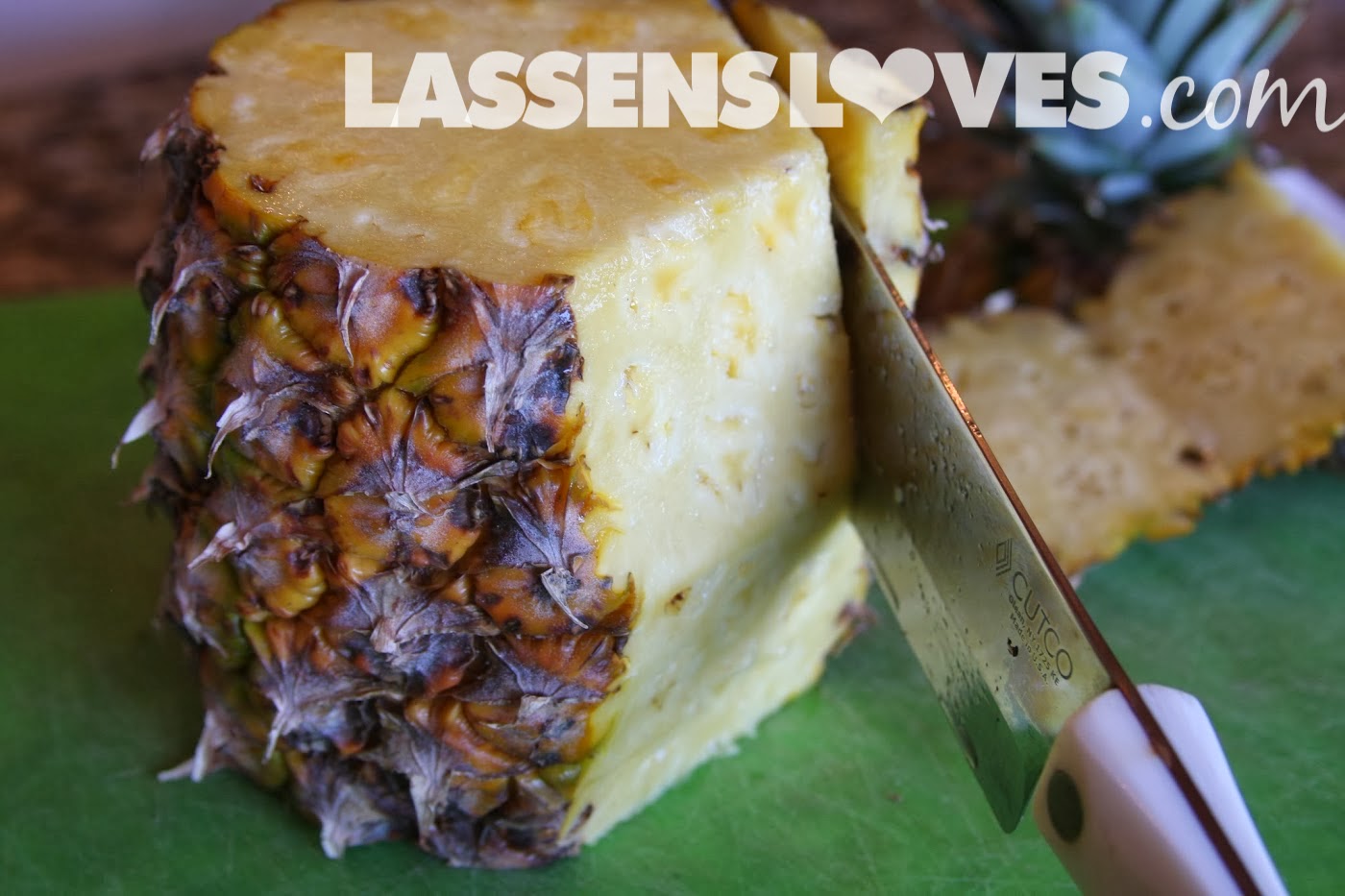 Cut off the rind.  Don’t worry if there are some little pieces of the rind left–you can trim them afterwards with a small knife. 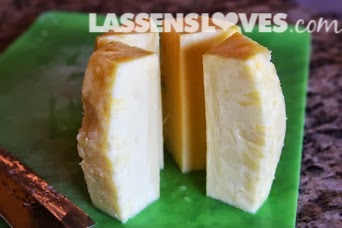 Then cut the pineapple into fourths. 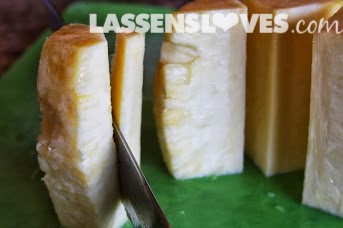 Slice off the core of each… 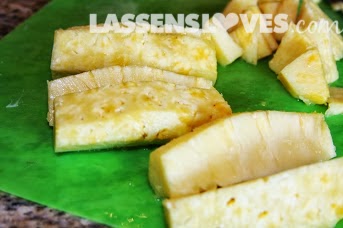 Put the flat sides on the cutting board, cut in half again, and then into chunks.  Done!

For a Fun Fourth of July Snack… 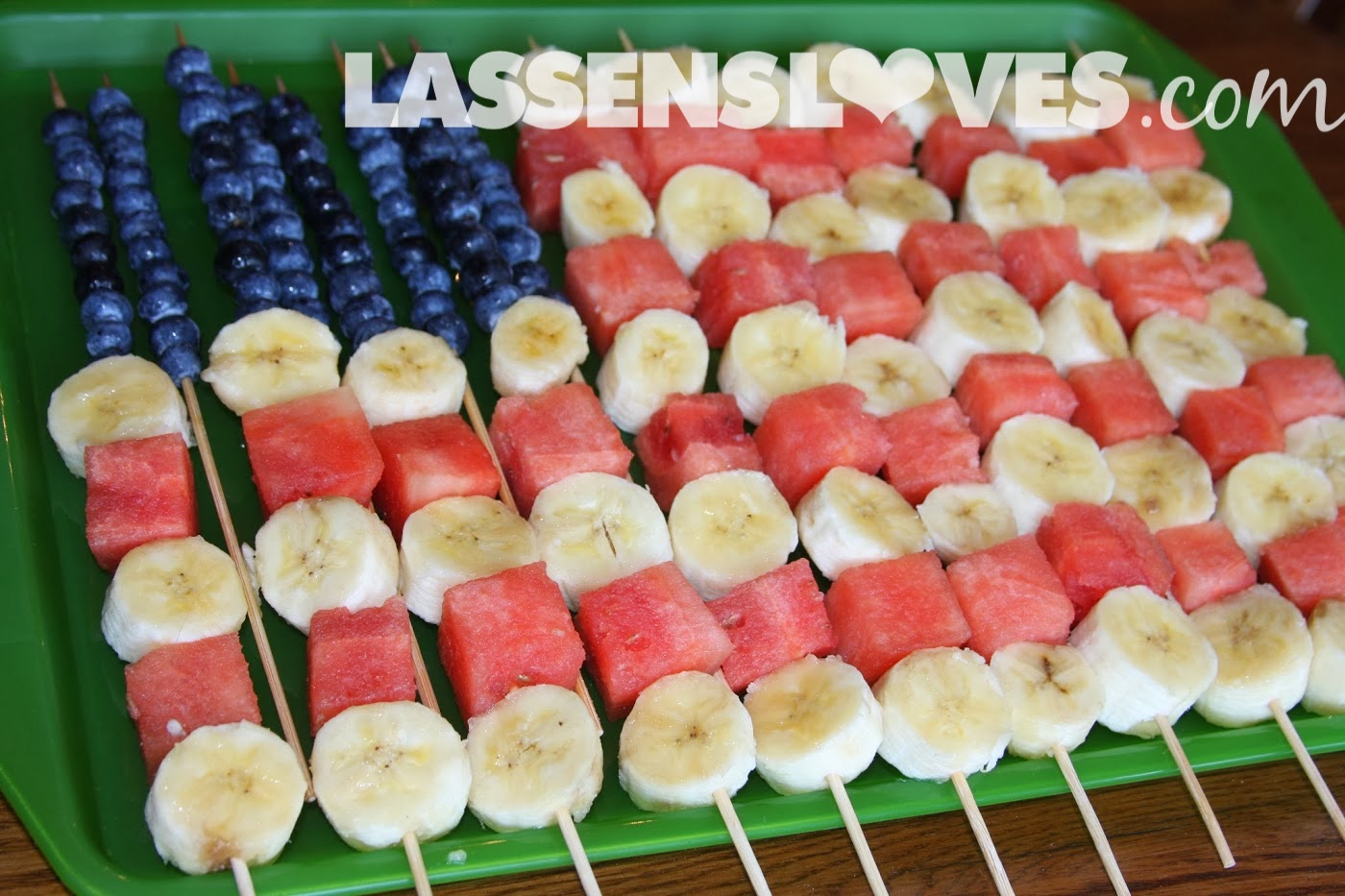 Skewers some banana slices, chunks of watermelon, and blueberries for a patriotic snack! 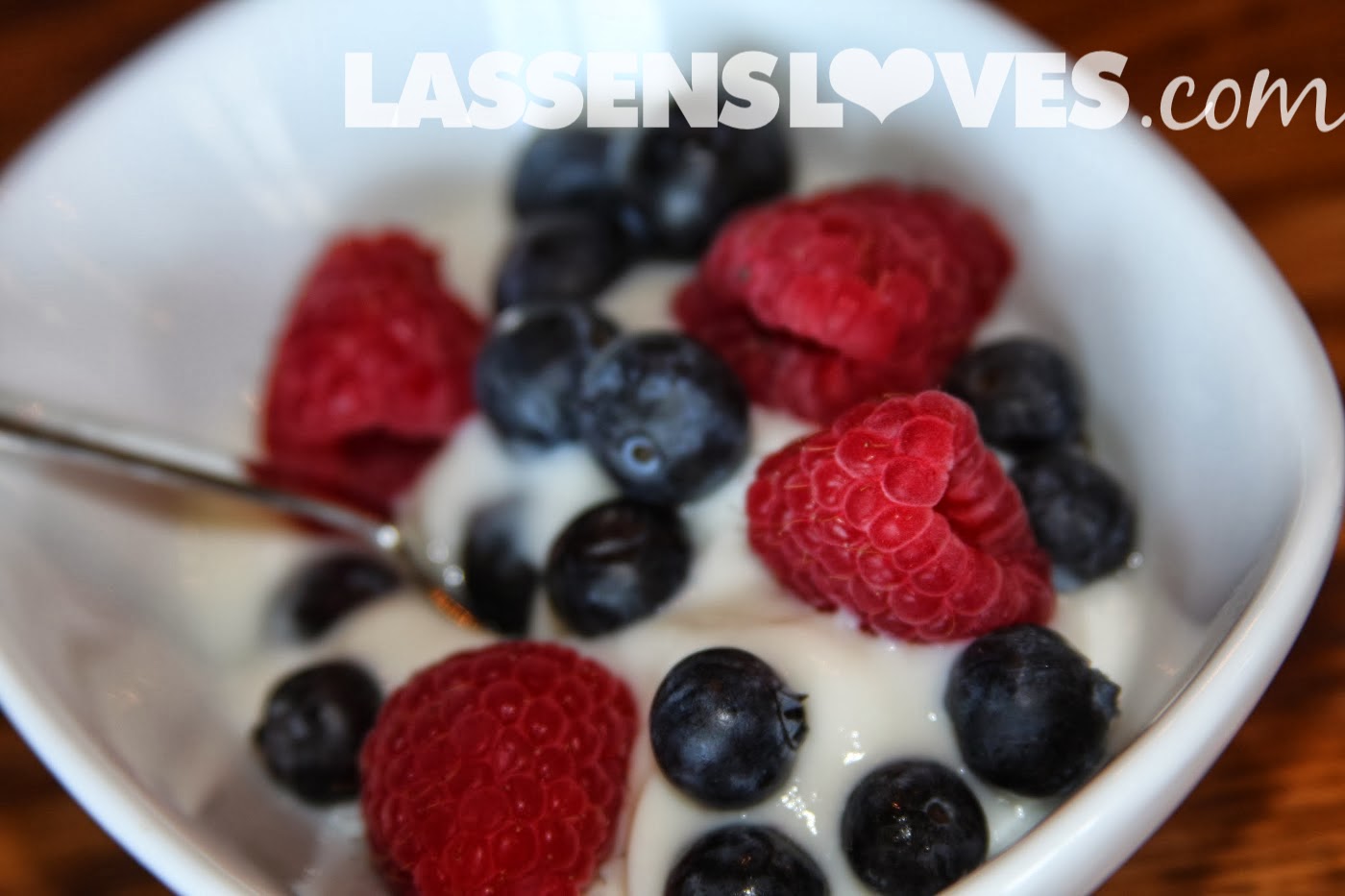 Or sprinkle fresh red raspberries and blueberries into vanilla yogurt! 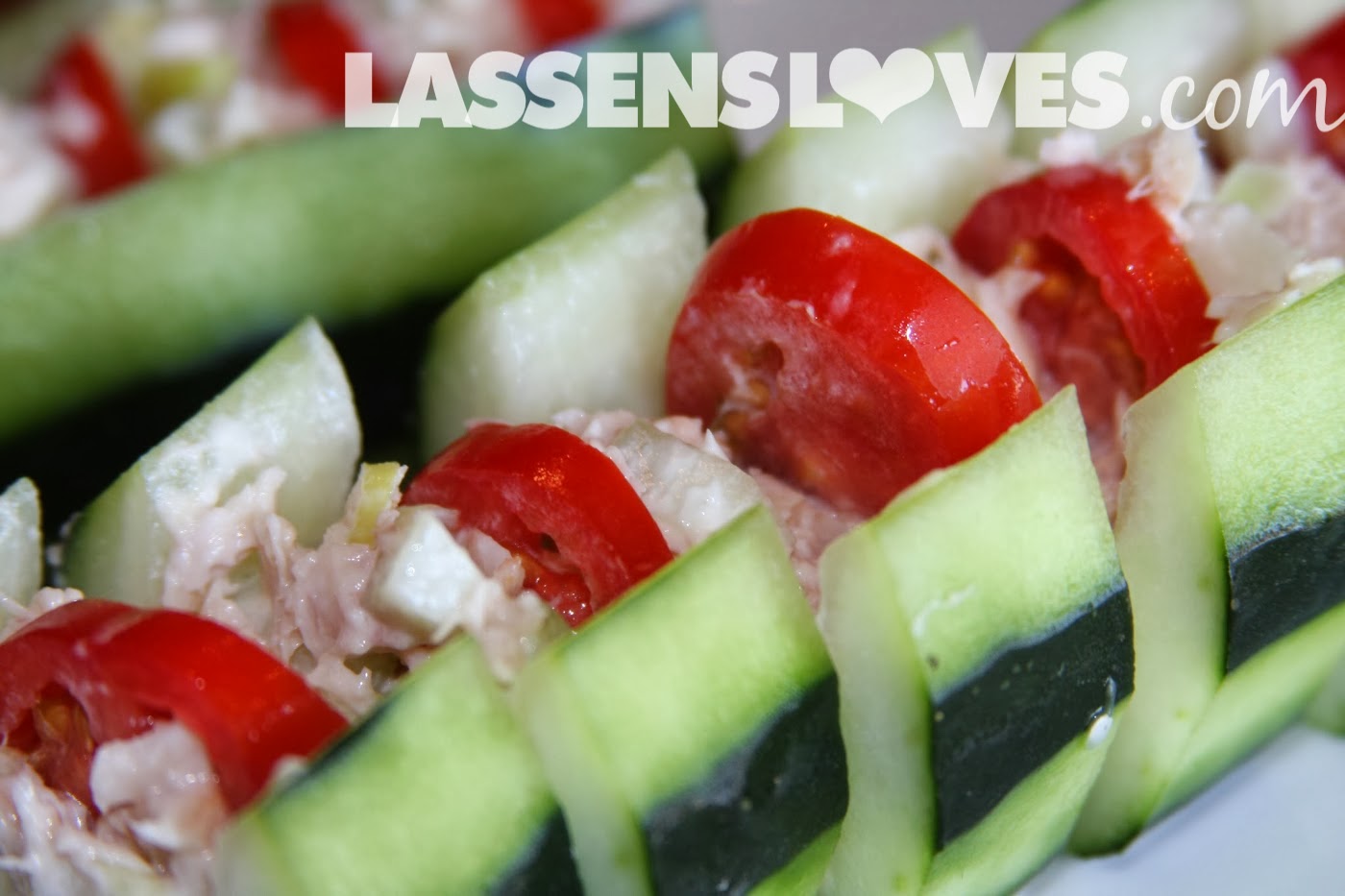 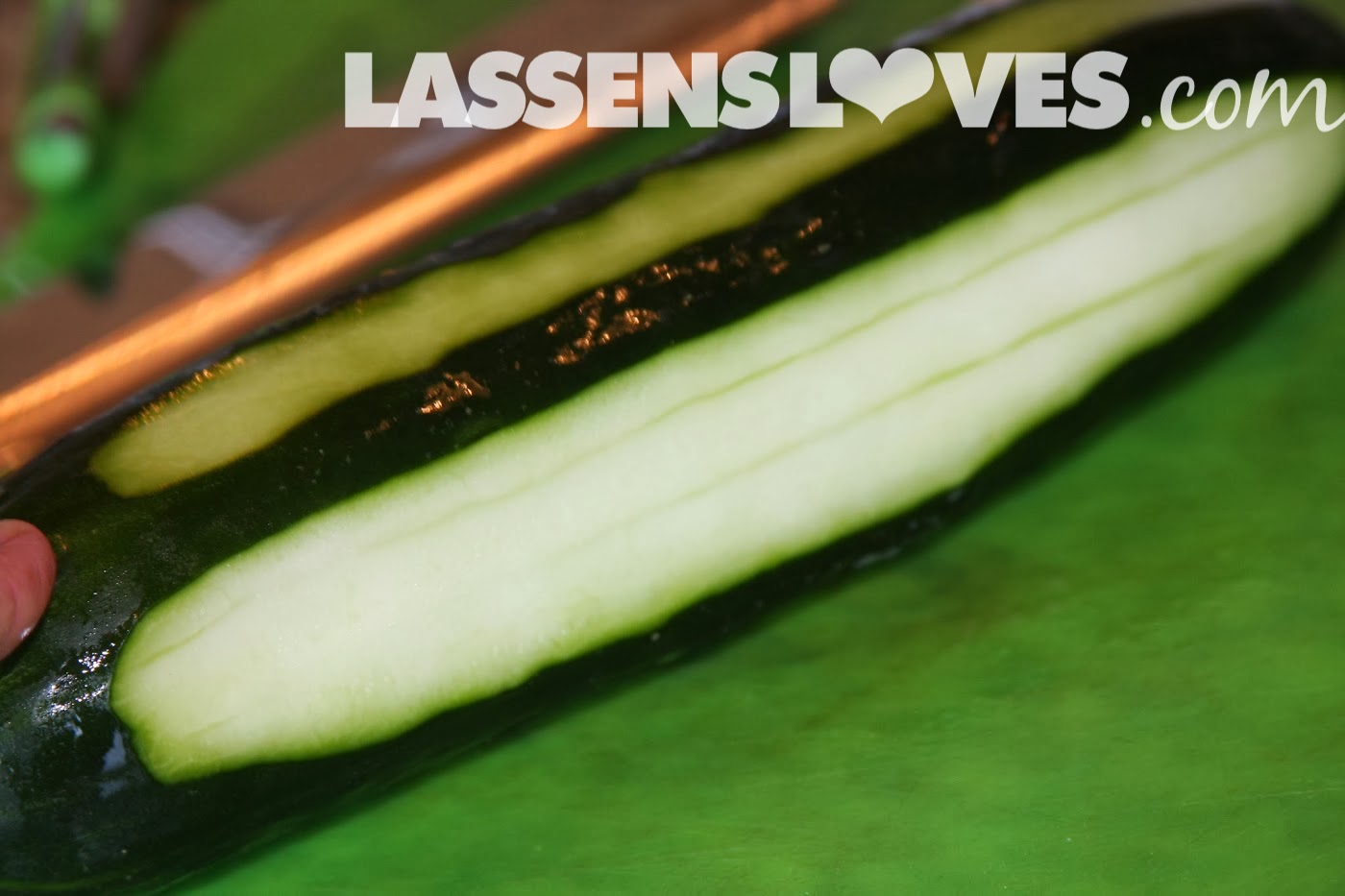 Make a couple of thick peels from the flattest side of a cucumber for the base (so it won’t roll around!) 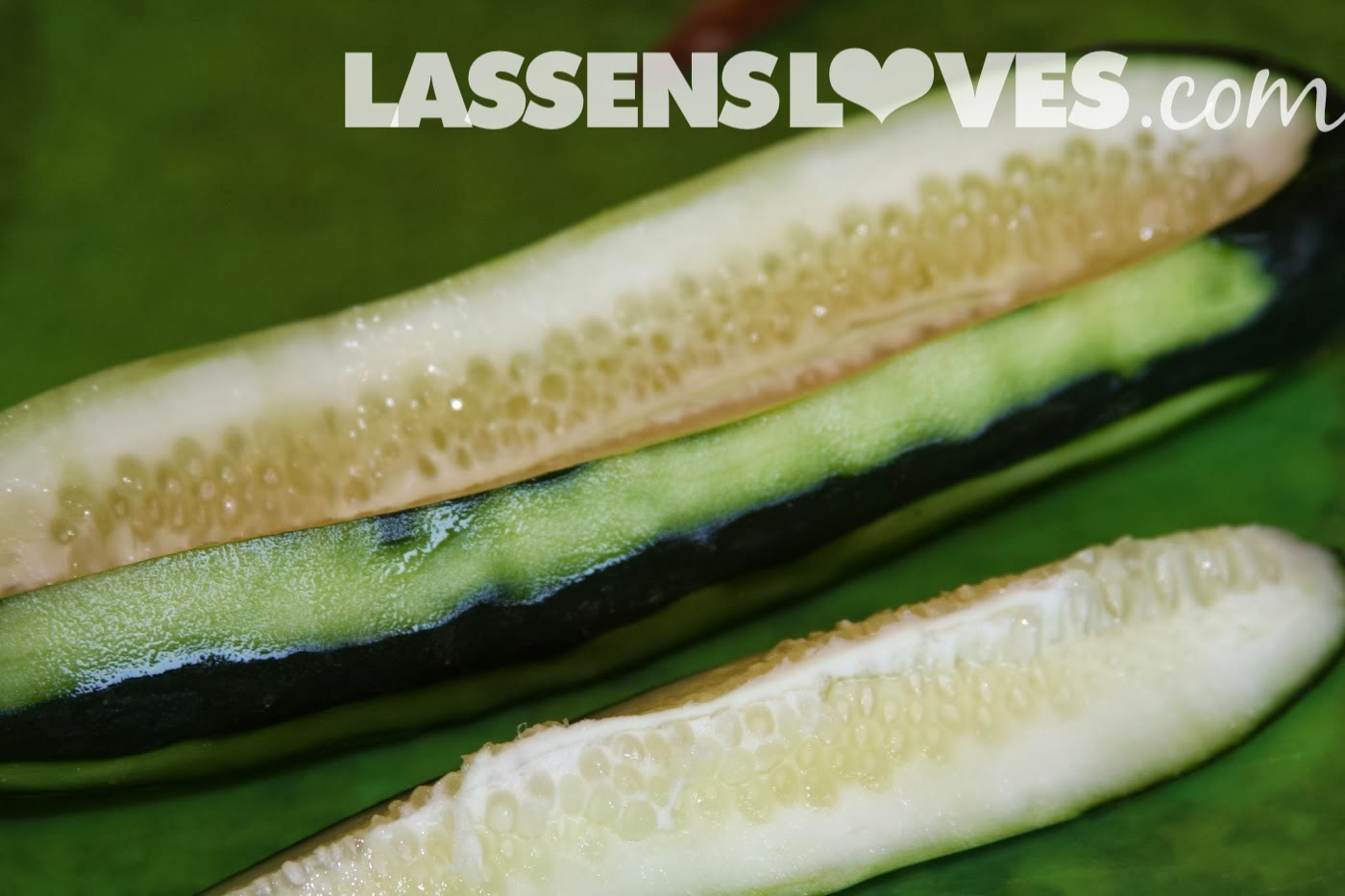 Take some thin peels from the sides (just to make it look nicer), and then cut a lengthwise wedge out of the top of the cucumber. 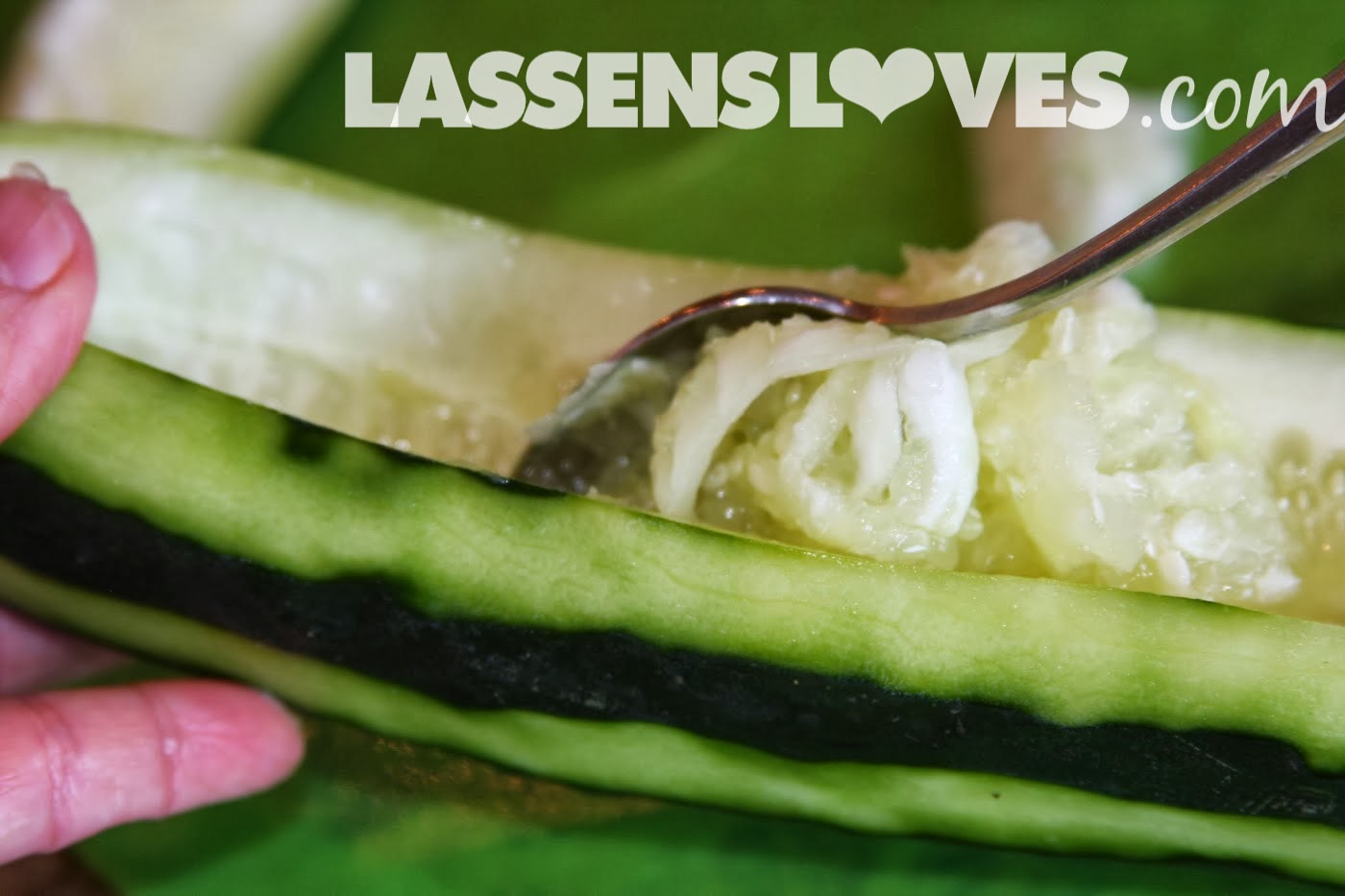 Scoop out the seedy inside of the cucumber. 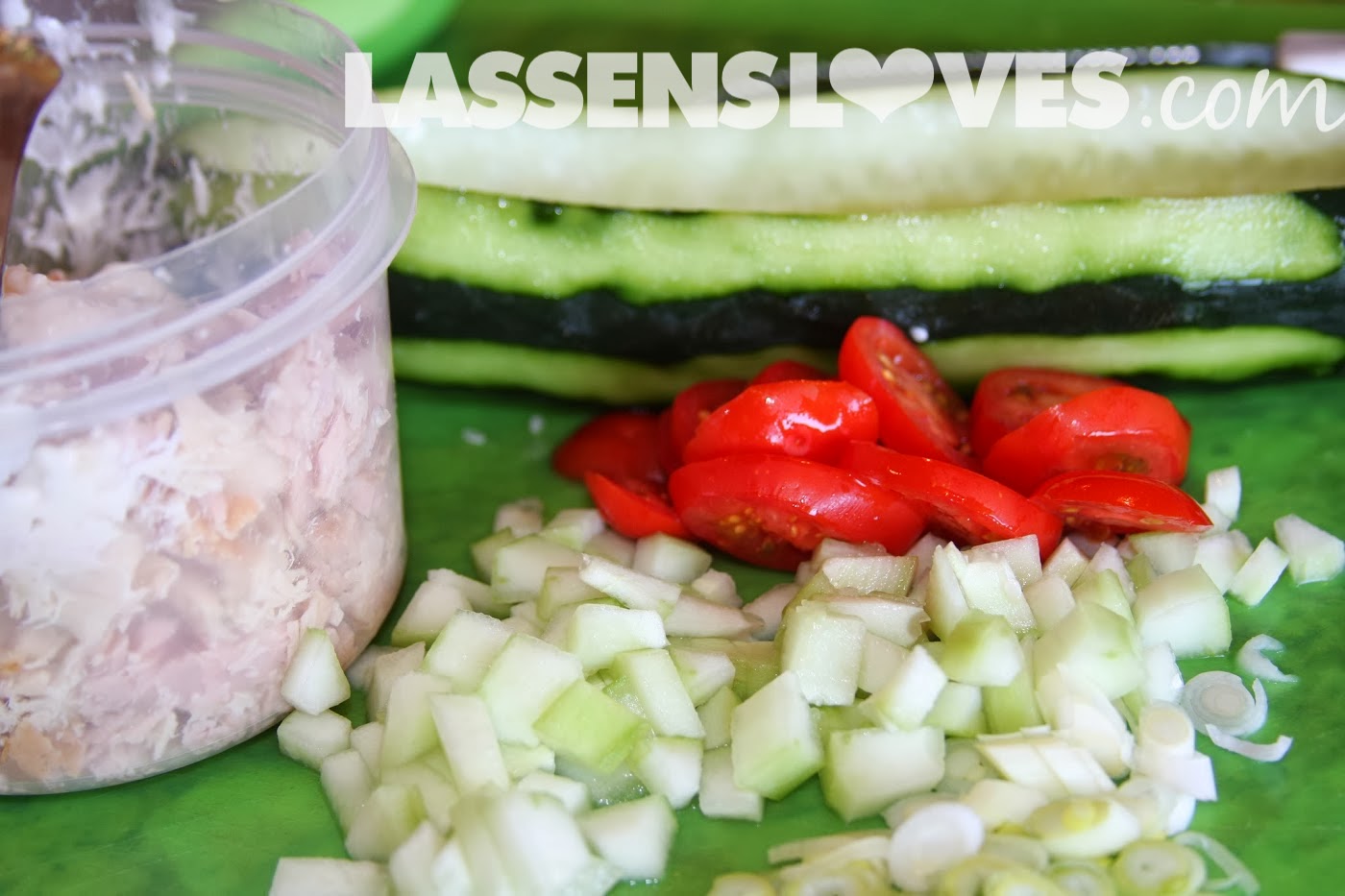 Discard the seeds, but chop the cucumber wedge and some green onions.  Slice some cherry tomatoes, and get some tuna salad ready (tuna, mayonnaise, salt and pepper) and then add the chopped cucumber and green onion to the tuna. 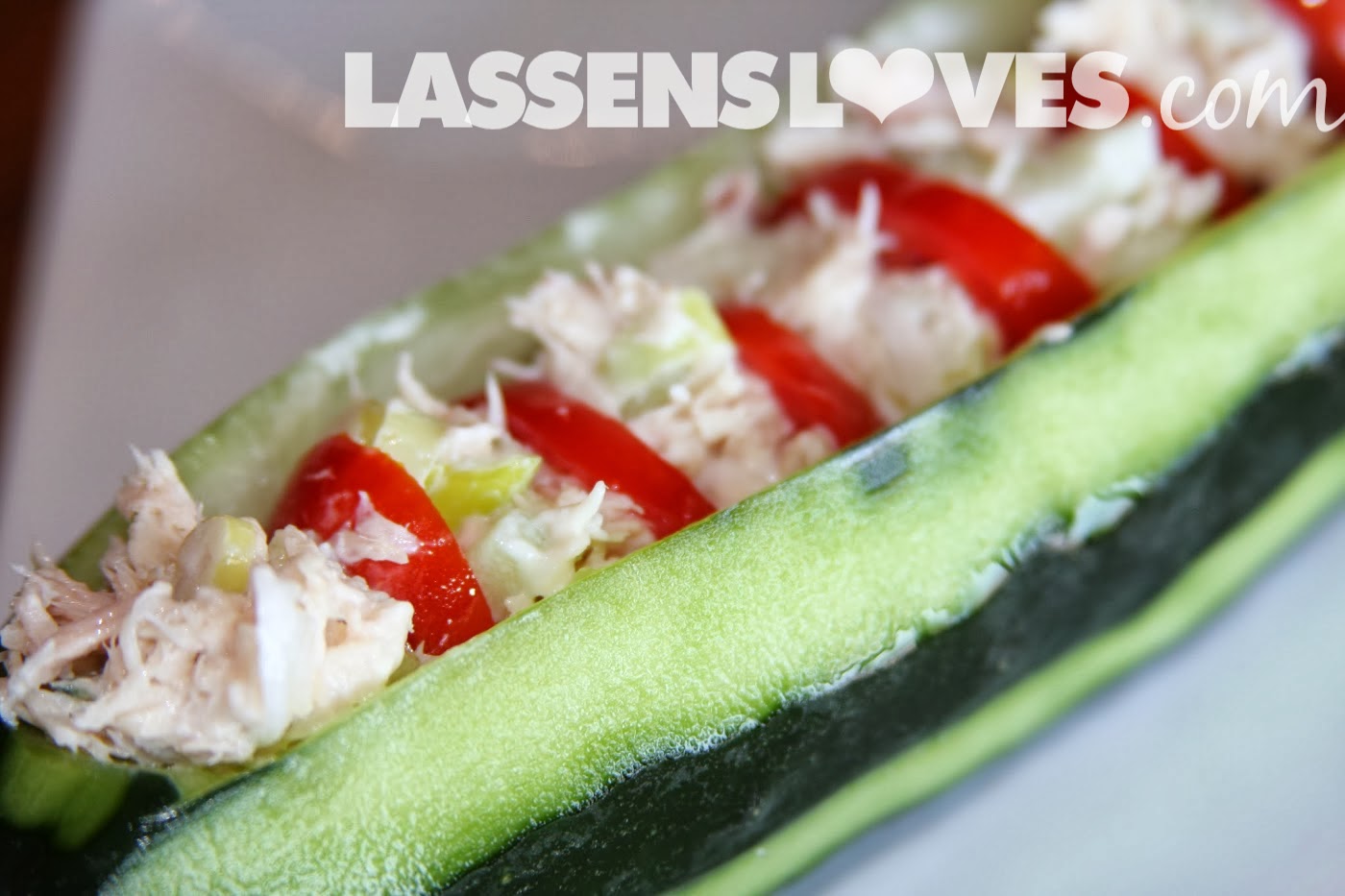 Arrange the tomato slices and the tuna salad in the cucumber boat. 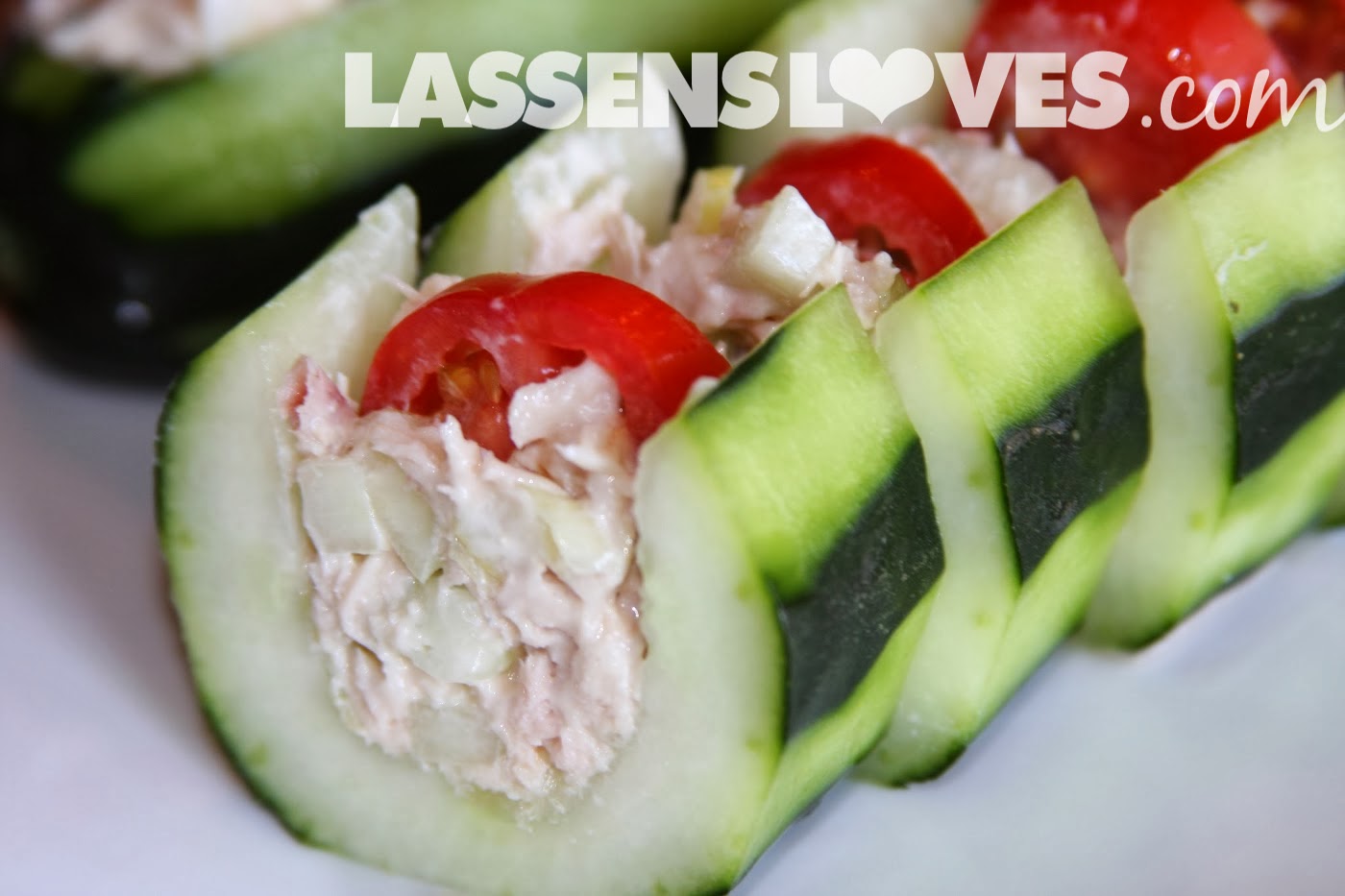 Slice through the tuna, and enjoy your tuna-cucumber boat lunch, with fresh pineapple and patriotic flag fruit skewers!  Then have a little yogurt and berries for dessert!  Yum!
Love,
Lassen’s

6 thoughts on “Cool Kitchen Tips and a Fun Lunch”