Is That Even Possible? 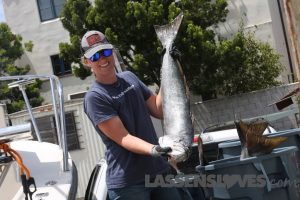 Sarah grew up watching her dad crabbing and clamming on Cape Cod.  She was more of a catch-and-release kind of girl, but nevertheless benefitted from the healthy fresh seafood of her childhood.  She grew to love the sea and everything about it.  She earned degrees in Marine Biology, and started to do some research for a Phd by crewing on lobster boats off of Santa Barbara.  She did all of the tough work of a crew members, but also worked on surveying and mapping the Marine Protected Areas off of the coast.  She loved everything about being on the boats, including getting to know the fishermen.  She began to see how they were a dying breed–they call that the “graying of the fleet.” Not too many young people are becoming fishermen.  When her research was complete she returned to academia, only to realize that she missed the fishermen and the sea.

So she gave up the idea of a Phd, and fished for a season (from October through March) on a lobster boat.  She also worked selling the catch at Farmer’s Markets.  She began to see how important it was to bring the experience of the sea to consumers.  The longer she thought about it, the more she started to feel that there must be a way to connect the fishermen and the catch more closely.  Sarah said that for lobster, from fisherman to consumer were up to 10 people in the chain of ownership.  For fish it is up to six.  She wanted to find a way to reduce that chain, and make that chain transparent.

Sarah met with a group of academics who were concerned about the health of the sea and the sustainability of the fish stocks, and they brought her on as the operational manager of the newly born Community Seafood, which launched in June of 2012.  Soon she was the owner. 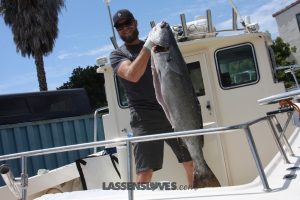 Sarah developed relationships with local fishermen, and she now works with about 70 men and women, from 1-15 per month.  She loves how they really care about the fish, and want to know that their catch is appreciated and how it is prepared.  They also are very concerned about the sustainability of the fisheries, and work to make sure no area is over fished. 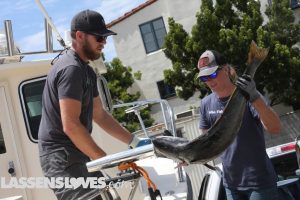 Now she meets the fishermen, just like I saw her do with Brent on a recent morning, and then takes the catch to cut and freeze. 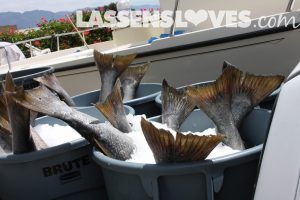 So Sarah developed procedures to tail tag each fish as it is brought in, and each package includes a QR code that will take you back to the interview with the fisherman who caught the fish.  You can use  your smartphone to scan the QR code and meet your fishermen! 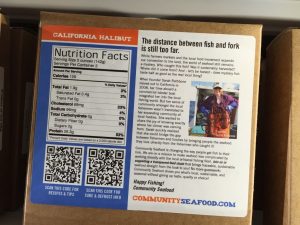 Now, three years later, Sarah and Community Seafood want to bring sustainable and traceable seafood from the waters off of Ventura, Santa Barbara, and LA counties to your table.  So earlier this year, Sarah decided to begin quick-freezing the fresh catch to bring the fish to the store shelves.  Lassen’s is proud to be one of the first retailers to offer Community Seafood in our freezer.

Meet your fishermen, and Sarah, when you pick up some Community Seafood at Lassen’s!