Mandalas with a Local Flair

What is a mandala, you may ask?  It comes from Buddhist and Hindu traditions and is a geometric figure that symbolizes the universe.  In addition, the figures are also used to represent virtues such as perfection, unity, completeness, balance, or eternity.  With its circle shape, it evokes the sun, community, and connectedness.  They are often used to assist in meditation–a focal point to aid concentration.  Some call mandalas “sacred geometry.”
So where is the local flair?  I’ll get to that.
Diane Steele is an Ojai businesswoman, who says that she was “born a dressmaker.”  She, along with her sisters, learned how to sew from their mother.  She was sewing custom items for clients from the time she was a young woman, but felt she needed more training, especially in pattern design.  She found an amazing teacher, Rene Rich, a Swiss/German fashion designer who taught her the metric system, which she found to be much more accurate for fitting.  Her training was in the back of a vacuum store in Los Angeles, and when she was finished, she could look at an image, draft the pattern, make the garment, and could even polish the pattern to be used in production.

Diane moved to Ojai and continued with custom fashion design, alterations, and repairs. Then she started working with three Ojai artists to make Ojai souvenirs, such as mugs, tiles, mouse pads, and other items, mostly featuring photography with the famous Ojai “pink moment.” 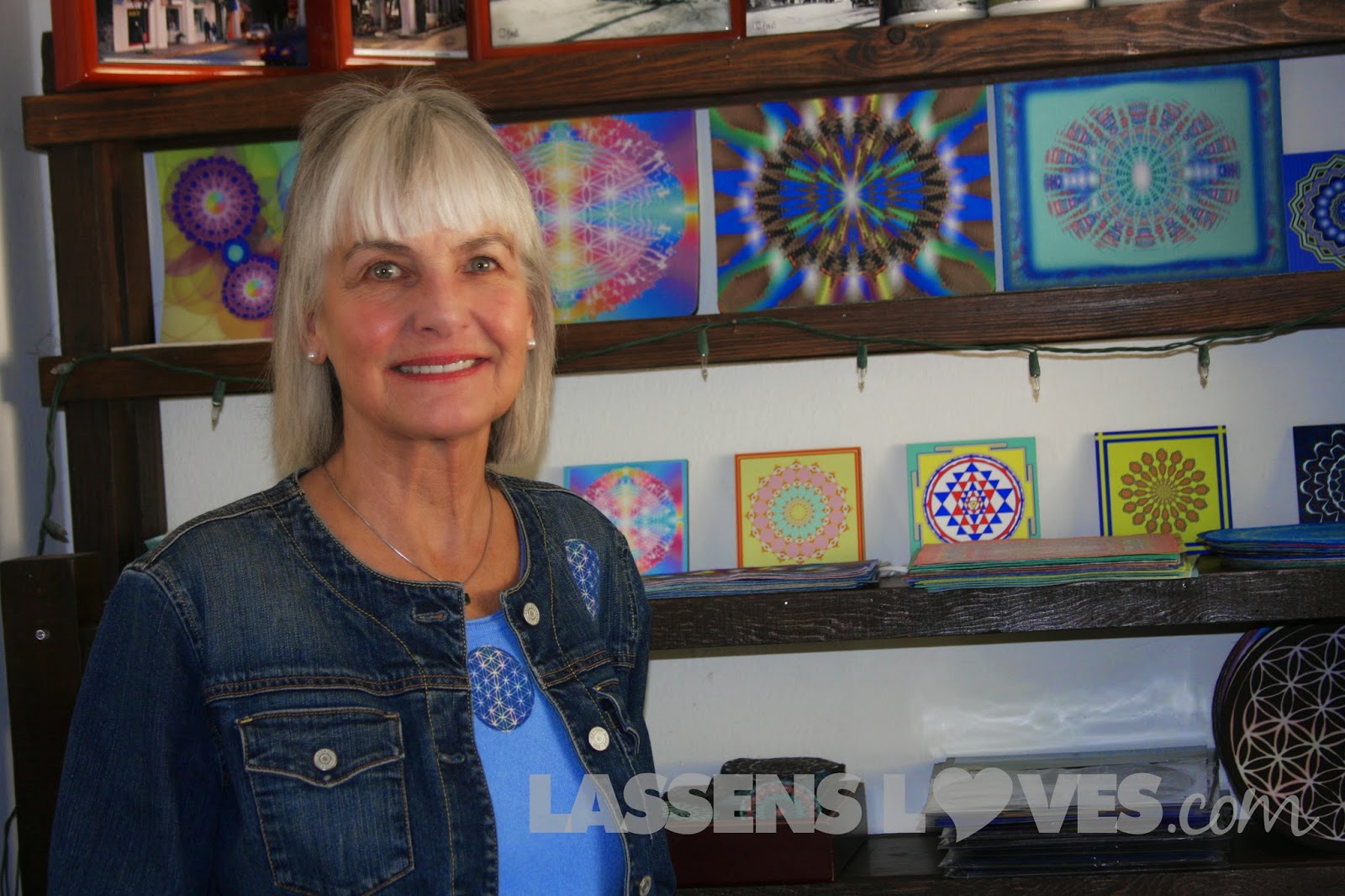 Then about ten years ago, Diane was approached by a local artist, Rhett Headly, who wanted her to make a collection of shirts and sarongs from his Mandala artwork, inspired by his travels to India.  His family had been traveling to India for many years  His parents, in fact, had brought transcendental meditation, and even the Maharishi Guru, to Santa Barbara.  As she sewed with the mandalas, she felt happy and peaceful.  She  began to put Rhett’s mandala designs on tiles and mugs for her souvenir business.  Then she decided to make wall hangings, banners, table decor, centerpieces, and other items of fabric with the mandalas.
Diane had a turning point in her life and business about three years ago when a friend, Don Midgett, told about an e-book that he had written, “Mission and Vision Statements: Your Path to a Successful Business Future.”  She read the book and realized that she needed to make some goals.  She set a 5-year goal to switch to all Made in America supplies.  She thought it would take a long time to make that switch, but it only took her three months!  She found 100% recycled felt made from post-consumer plastic water bottles by a company in New Hampshire.  And soon she had reached her goal.
Now Diane is making her beautiful mandalas for several stores in Ojai, and we are happy that Lassen’s is carrying them as well.  Since they have been shown to be such a great aid in meditation, some of her social worker friends have been using them to assist people who are in recovery.  Diane would love to have meditation and her mandalas used in Rehabilitation Centers everywhere.

Before I left Diane’s studio, I asked her to show me her Mission Vision Statement that I had seen on the wall of her work room.  It said,

We have such amazing local artists and producers, and I appreciate all of them sharing their passion with Lassen’s!