Let’s Be Smart About This

OK, I’ll admit it.  I take water for granted.  I had my eyes opened when I went to Uganda and this was a sight seen multiple times hourly. 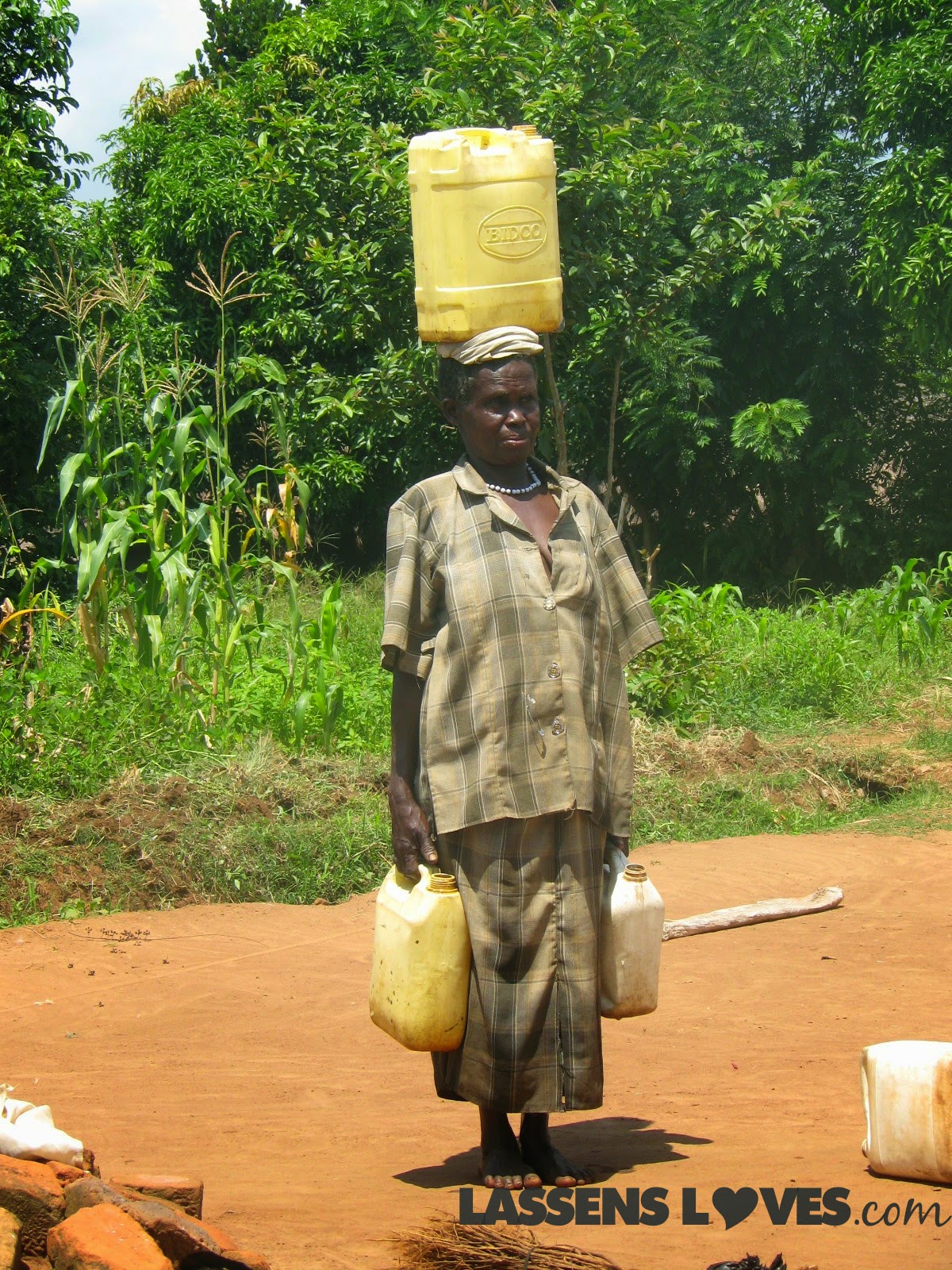 This is Ventorina, bringing a supply of water to her hut as she does multiple times per day.  Because of what I saw there, we now donate to an organization that has very effective water projects in Uganda and throughout Africa.
But here at home, we have a problem, too.  The west is in a severe drought.  We received notification from our water provider that conservations restrictions are in place.  We don’t have to hand carry our daily supply of water, like Ventorina must.  But there are many simple things that we can do to conserve water.  Here are some of the top tips that I have found that can help save water.  One of the things that stands in our way is that we don’t want to be inconvenienced, but it is surprising how much can be saved by simple changes.

Turn the water off when brushing your teeth, peeling vegetables, and lathering up your hands.  One of the reasons that I like pump soap for my hands is that I can lather up and scrub without running the water.  My father-in-law was a kitchen boy at age 14 when he left home and went to sea.  His habits of conserving water were very helpful–he would put some water in a pot when he peeled the vegetables, and then he would do one quick rinse when everything was peeled.  He probably saved 4 gallons of water every time he used that trick.
Take shorter showers.  This one can be a bit painful, but as an experiment, you might time your showers and then cut back the time by a few minutes each week.  Maybe have a contest!  (This probably isn’t a good idea if you have any 11-year-old boys who refuse to shower…)  Make five-minute showers your goal.
Most homes now have low-flow shower heads, but if yours doesn’t invest in a new, water conserving shower head.  You’ll use about half the amount of water in a typical shower.
Also, if your toilet is older, place a jug of pebbles and water and place it in the tank, displacing some of the water in the tank.  Each flush will take less water.  Check for leaks and promptly repair them.  A leaky toilet can waste up to 20-200 gallons per day.
Your dishwasher and washing machine probably have “short cycle” settings.  I have experimented and found that both dishes and clothes get just as clean on the short cycle as they do on the longer ones.  And of course don’t run either until there is a full load.

This is the hard one.  At least 30% of water consumption in most homes is used outdoors.  But the question is if that water is really being used by the landscaping or is it wasted on the sidewalks and roads, or evaporates into the air?
I value my green lawn as much as the next guy.  It brings me such pleasure to see my yard in luscious color.  But when our water district said that we needed to limit watering to 2 days per week, we let the grass grow a bit longer and then applied 1 inch of organic mulch on top.  So far it is helping to keep the moisture in the soil longer.  The rest of our landscaping is well-protected from run-off and evaporation by a thick layer of mulch.
All sprinkler systems should be checked regularly to make sure that the water is going where it should and not just run off.  Watering should be done in the early morning before the heat of the day so that the water is absorbed into the plants rather than evaporating.  Most recommendations say the watering should be done before 8:00 AM.
If you have a garden, a drip system is the most water-wise method of watering.  My experience with drip-systems is that you can’t just place the lines and forget them–they take attention just like anything else–or the lines will twist around and you’ll be watering the patio.
Also, check out my post on container garden watering here. 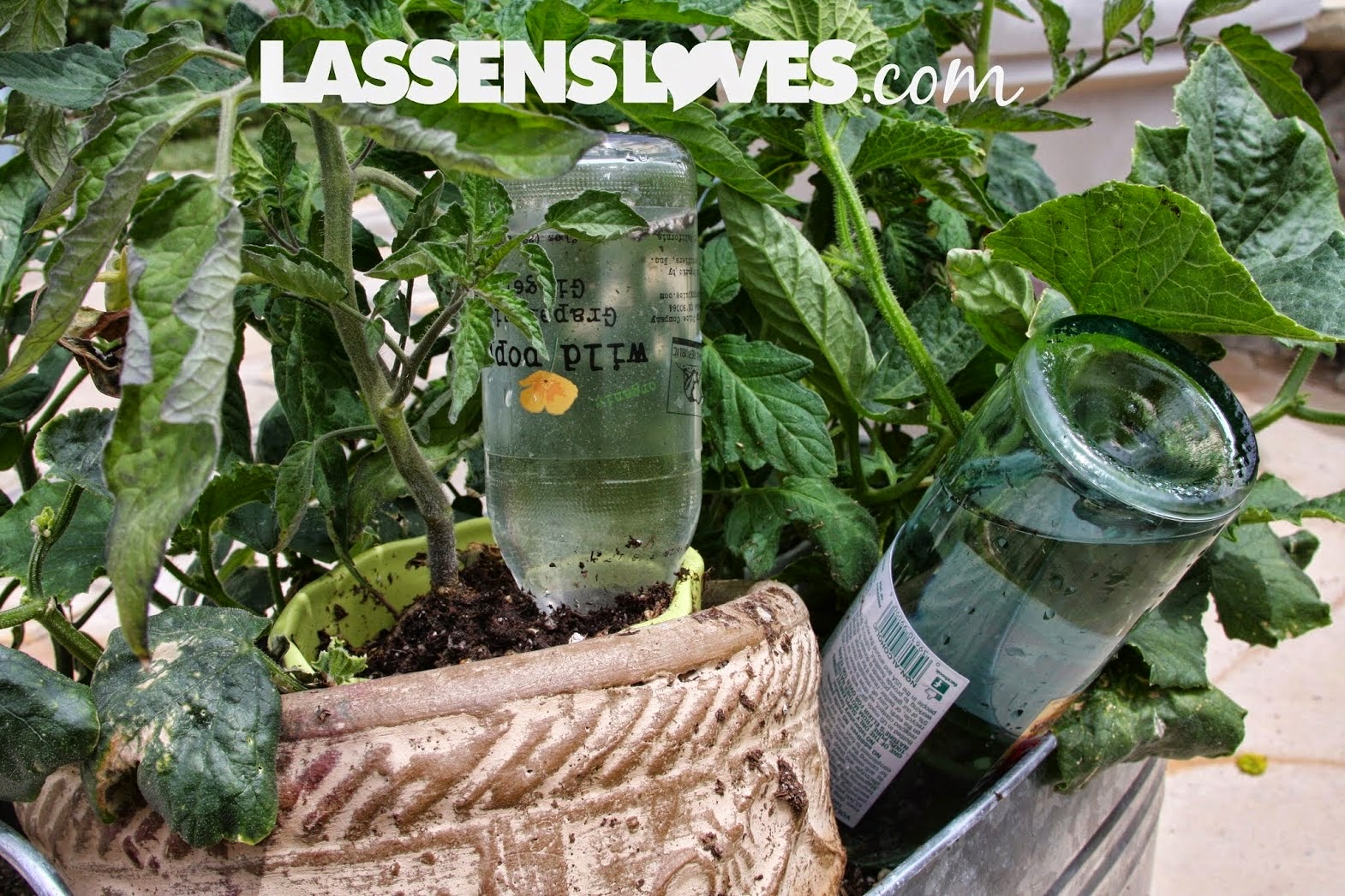 I know you are going to think I’m at it again, but buy organic.  When I read in the LA Times that there are many more deep wells being dug to irrigate the crops in the Central Valley, I was intrigued.  It seems that the ground water has been contaminated by all of the pesticides and herbicides in commercial agriculture.  So that water cannot be used for irrigation–And farmers have to look somewhere for the water to irrigate their crops.  When we support Organic Farmers by purchasing organic foods, we support healthier soil and water. ‘Nuf said.
Let’s all pay a bit more attention to what is going down the drain!
Love,
Lassen’s